Maduvha Madima is a South African Actress and Musician of Afro-pop music. Her age is between 30s to 40s. She is best known on television for her role as Vele Rambulana on the SABC2 soapie Muvhango.

Biography profile of Vele from Muvhango

Maduvha Madima was born in the small village of Makwarela in the South African province of Limpopo’s Vhembe region. She was raised in Makwarela, Venda, and was born in the 1980s or 1990s. Maduvha began playing in front of large crowds at the age of 4 in Venda. She thus developed into a musician as a result of her parents’ shared passion for music. The gospel group Echo, where the curtain was raised for the group, had her uncle and dad as members.

Maduvha went to Makwarela for both her primary and secondary education. She joined in The Basic School of the Arts after completing her basic schooling and studied subjects relating to the arts there. She also attended the University of Johannesburg, however it is unknown what she specifically studied there. 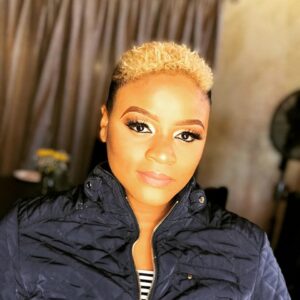 Her portrayal of Vele Rambulana in the SABC2 serial opera Muvhango, as well as her four seasons as Minister Lufuno Joyful Mudau in The River, added to her fame.

● Ring of Lies – Season 2 as Tshilidzi

Also read: Who is Wiseman Zitha? Age, wife, wedding, and Net worth.

Career as a Musician

In the gospel genre, she supported Vicky Vilakazi, Margaret Motsage, Itani Madima, Jabu Hlongwane, Vuyo Mokoena, Mthunzi Namba, Back To God, Redeemed, and, of course, Joyous Celebration, and was especially notable for her outstanding solo on the gospel ensemble Joyous Celebration 6, singing lead vocals on the song Under The Blood. Maduvha successfully stood in for Nhlanhla Nciza on maternity leave when Mafikizolo was at the pinnacle of their success.

Also read: Who is Fumani Shilubana? Age, children, and wife.

Maduvha released her debut album, simply titled “MADUVHA,” in 2006. The songs Light Of My Life, U Lavi Wam, and the Venda jazz piece Fhumulani from the album were well received by the general public. This album expanded her horizons, allowing her to perform on international stages all over the world. The album was nominated for three SAMA awards in 2007: best newcomer, best urban pop, and best female performer.

Her second solo album, AFRICA, features three urban Vendasongs: the captivatingly rhythmic Kondelelani[Endure], a song that challenges listeners to persevere despite difficulties, ‘Ndi a Ni Funa,’ which has become a national radio smash, and the gospel hymn Mulweli.

She was in a relationship with Tshifhiwa Thidiela and they were preparing to get married. There is no information about their wedding going ahead. Maduvha has one daughter whom she loves so much. It’s not clear if her daughter’s baby daddy is for her ex husband.

Maduvha Madima, an actress and musician, has shared some heartbreaking details about her battle with depression. The creative industry is notorious for its volatility. Many artists understand the agony of going an entire year without a single gig. Such realities frequently cause its practitioners to wallow in dark places, particularly depression.

Maduvha Madima had a particularly difficult year in 2015. The multi-talented star revealed how a lack of employment forced her to swim in dark oceans. In the Sunday Sun, the former Muvhango actress, who played Vho — Vele brilliantly, spoke candidly about her depression.

“I went through depression. I know the pain of being an artist and not getting jobs. I hadn’t done anything wrong but I felt like I had. I guess it was a matter of out of sight, out of mind. The instability of the entertainment industry, pretty much compels artists to spread their talents across other sectors of business.”