Laura M: Her last hope was to commit suicide.

Laura M went through a lot that she decided to end her life because living in hell was too much.

Laura M is life coach, executive and motivational speaker from Koedoesspoort Mpumalanga. Life started to become difficulty in 2006 when she was diagnosed with unknown disease. The doctors could not see what was wrong with her until 2007. She was given wrong medication which lead her to succumb to another disease called Multi-Drug resistant tuberculosis (MDR-TB). The disease was found few months later after given wrong medication.

The fact that she was given wrong medication caused her depression and badly affected her health. Due to that her left lung collapsed and she used to cough out meat from inside. She was hospitalized for 8 months and that was in 2007.
In 2008 when giving birth her son was declared dead. In 2009 she went through a 11 hour lung removal operation and life support could not kick in.

The year 2015 she was divorced and 2016 she got into a relationship. Unfortunately the boyfriend used to emotionally abused her. In 2017 she lost her job that when she thought of committing suicide. She tried to commit suicide twice in 2017 and she thought that was the only way. Everything was overwhelming her, she was not working and could not provide for her kids and also the issue of being abused was taking its toll.

After all she went through she wrote a book called ‘Through hell but not consumed’.
Laura is still alive she decided not to end his life but give hope to others who are going through the same situation.
If you are going through depression you can contact her 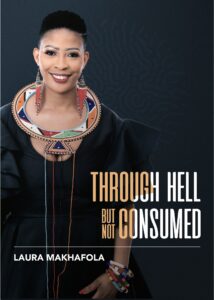