Biography profile of Vuvu from Scandal

Known as: Vuvu from Scandal

Mamarumo Marokane is a South African Actress. She was born 15 August 1996 which means she is 26 years old. (2022) Currently she is well known as Nhlamulo’s baby mama on Scandal by the name of Vuvu.

She received a diploma in Acting for Camera and Live Performance from City Varsity School of Media and Creative Arts while attending.

In the MTV drama series MTV Shuga: Down South, she played the character Dineo, for which she was well known.

In the BET Africa drama series Grit, which aired for two seasons from 2016–2017, Mamarumo made her acting debut on television.

As part of the channel’s “Lokshin Bioskop” series of one-hour TV movies, she next made an appearance in the Mzansi Magic telemovie Isipho Sothando.

The film, which tells the story of a young, naive couple from a family known for money laundering who endangers their lives by sticking together, premiered on October 18th, 2018.

Next, Mamarumo appeared in “Down South 2,” the seventh season of the MTV drama series MTV Shuga, as recurrent character Dineo, a student of sports science.

She made several appearances during the season, starting with the Season 7 debut on February 19, 2019.

In the superhero action series Shadow, which aired on Netflix South Africa on March 8th, she had a guest appearance a month later.

Additionally in 2019, she starred in the Lokshin Bioskop telemovie Magenge, which aired on Mzansi Magic and was about a young man who, following the death of his mother, turns to a life of excessive partying until his father intervenes to assist him get back on the right track.

The first to air was the romantic comedy Love Lerato Thando, about a 23-year-old philosophy student who challenges herself to be open to love. In 2021, Mamarumo appeared in two additional Lokshin Bioskop films. On January 24, the movie debuted on Mzansi Magic.

Her subsequent role was in Wa Lepelle, a paranormal tale about a generational curse that debuted on Mzansi Magic on June 12.

As Letti in the eOriginal series Is’phindiselo, the first local production to air on the recently founded eVOD digital streaming service, Mamarumo had another prominent role in 2021.

The online series, which is partly based on the plot of The Count of Monte Cristo by Alexandre Dumas, made its debut when eVOD went live at 20h00 on August 5, 2021. 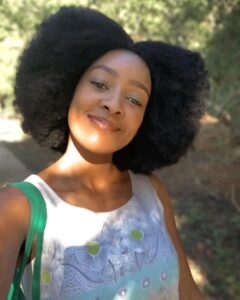 Also read: How Ntando Mncube and Wiseman Mncube are related