South African Actress, Nyeleti Khoza was born on the 24th of March 1994. She was raised in Hazyview until the age of 13. Then she moved to White River in Mpumalanga where she considered as her home. Currently she lives in Johannesburg.

The crucial moment came when, while in grade 11, she traveled to New York with her modeling agency to compete in an acting competition and returned with a $10,000 (about R152 493) scholarship.

She immediately left after finishing her senior year of high school and moved to New York City, where she attended the New York Film Academy to pursue an arts degree.

Also read: Who is Fezile Makhanya? Age, wife, wedding pictures and net worth.

Nyeleti made the decision to pursue acting at the age of nine after falling in love with live performance while portraying the Wicked Witch of the West in The Wizard of Oz.

She appeared in the show called the Real as a guest among the crowd. Her first role was on Mbongeni of Woza Albert in 2016. Also she worked on Insecure Season 2(2017) featured as a museum goer.

Nyeleti appeared as a lead role in a web series called Black Tea as Tanya, the bad girl.
She also appeared in a Netflix film called Soweto Blaze alongside Matli Mohapeloa.

She was booked to appear in music video with Moses Sumney in a song called Doomed. It was an opportunity to showcase her love for water and acting.

Also she then signed a contract for her first touring production of Heritage (2017), in which she portrays a boisterous teenage African immigrant in America who grows up hating AA women because of their standards of beauty.

Bounty Hunter Ds and Pretty Woman Bad Attitude (2017), which have amassed 1,4 million YouTube views to date, are included among her body of work. She portrays an opiate-dependent adolescent in Remember Me (2017) and a receptionist who helps a young person in need land a job at the company in Consequences (2017). 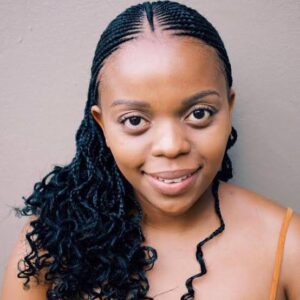 Also read: 6 House of Zwide actors and their spouses or partner.

The Mudau and Baloyi clans’ feud is at the heart of the television program.

She portrayed a no-nonsense attorney who comes from a wealthy family and never loses a case but chooses to take on several pro bono cases for the residents of Giyani.

Since she is 28 years old in 2022, she had never share an information about her husband or boyfriend. It seems that she is not yet married but might be in a relationship.