Sindi Dlathu life story AKA Lindiwe on the River.

Sindiswa Dlathu biography, she is known by her acting name as Thandaza Mokoena from Muvhango.

Sindi Dlathu is a South African Actress, Co-executive producer and Singer. She was born on 4 January 1974 which means this year 2022 she is 48 years old. The actress is from Meadowlands,Soweto Johannesburg.
She is a married woman with two kids and she is married to Oliafant Nkosi. Also she finished her matric in 1996.

Her journey in acting career.

In Muvhango she was acting as Thandaza, the character started as she was young.She acted in Muvhango for almost 20 years until 2018 when she decided to exit the sopie. She shared how she came to decide exiting the drama in another interview. The interviewer asked how she managed to exit in a drama when she had reached 20years. Sindi responded that it was not easy because she started praying to God about her decision to exit long time ago. 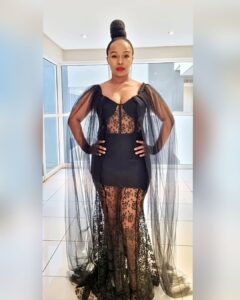 Muvhango being her family for almost 20years, she struggled to decide n keep praying until 2018 when God spoke to her that it was the time to exit. After her exit from Muvhango she then joined the “River” where she is currently acting as Lindiwe.

In 2019, Sindiswa found out that someone was using her name to advertise some skin care products. After that she released a statement warning the people that she was not involved with them. She didn’t not give her consent to be used in their products. Lets found out below what was written in the statement. 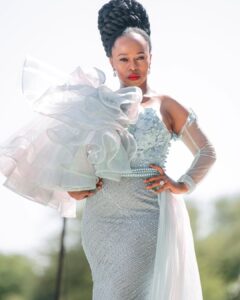 She was also thought to be HIV positive by her fans because of her character she was acting in Soul city. She responded that she was HIV negative.

In 2020 she got an award for favourite actress at the 2020 DStv Mzansi Viewers’ Choice Awards.
She won SAFTAs award this year 2021 in the River for being the best actress. 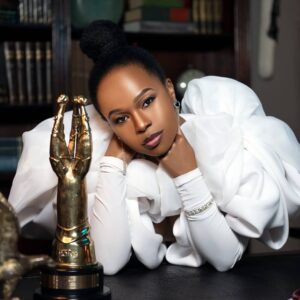