From: Pimville in South Africa

Known as: Kolo on Muvhango

Siphiwe Hlabangane who was born 26 April 1984 is a South African Actor and Producer. He hails from Pimville in South Africa. As of 2022, he is 38 years old. The actor is best known for his character as Kolo Modise from Muvhango.

Hlabangane is a married man who is married to his wife Nthabiseng Hlabangane. His net worth is estimated to be $200 000.

He was one of the Top Eight theatre department performers in his final year at the school, and he won Best Ensemble for his work in Woza Albert.

Under the direction of Hotshots and in collaboration with certain production firm owners, he successfully finished a MAPPP SETA recognized television producing course.

Les Liasons Dangereuses (2003), Rosencrantz and Guildenstern are Dead (2005), Nongogo (2005), and the self-penned play The Beauty of Us (2005) are just a few of the productions he has worked on at the Johannesburg Civic Theatres’ Actors Centre.

He played Blakie during a six-week run of Nongogo at the Market Theatre in 2006, at which time he was nominated for Best Supporting Actor.

He played the role of Vusi Makhathini-Rutherford, a young, aspiring accountant who was raised by white foster parents, in the SABC2 sitcom Konsternasie Oppie Stasie in 2009.

From 2009 to 2011, he served as the host of the fifth and sixth seasons of the SABC1 documentary reality program Kaelo – Stories of Hope, which demonstrates how South African communities and the public, commercial, and civil sectors collaborate to advance the country.

He had an appearance in the 2011 motion picture Winnie Mandela.

He appeared as a radio DJ in an episode of the Mzansi Magic telenovela iNkaba in 2012, and the Mzansi Magic soap opera Zabalaza the following year. He had a guest appearance in the SABC2 comedy Geraamtes in die Kas in 2013.

In three episodes of the SABC1 drama series Intersexions (also in 2013), Siphiwe appeared as the lead guest star as the gospel performer Thapelo.

In the 2015 comedy series B&B on eKasi+ and e.tv, he was cast as the lead character, Duma “Boss” Beseni, an aspiring businessman who purchases a bed and breakfast after winning R5 million in the lottery. 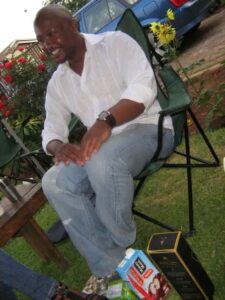 Career as a Producer

The short film Death of a Dream, which Siphiwe later produced, wrote, and directed, was shown on Soweto TV.

Siphiwe was inspired to continue making television at Curious Pictures by the film Death of a Dream. He contributed to the writing team that created the Heartlines drama Hopeville. Siphiwe worked on every aspect of this project, from its conception to its promotion.