AYANDA’S WORST ENEMY IS BACK FOR BLOOD IN GENERATIONS:THE LEGACY.

AYANDA’S WORST ENEMY IS BACK FOR BLOOD IN GENERATIONS:THE LEGACY.

After vanishing from Generations: The Legacy, Oby Phakade, played by Khabonina Qubeka, returns. Mrs Phakade is not to be trifled with, and she is willing to go to any length to avenge herself.

Oby is married to Gaddafi’s cousin Kumkani Phakade. While Gaddafi was fleeing the South African police, the two married and Gaddafi returned to Nigeria married to a diplomat who was able to protect him from arrest. Tshidi Moroka and Kumkani departed Generations: The Legacy after they chose to get back together. 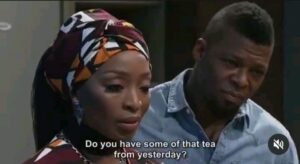 Oby will most likely return alone this time because Kumkani is having the time of his life with Tshidi in Paris, France.

Oby is well-known for practicing witchcraft and drugging people with her special tea. She also used hypnosis to gain control of others in order to obtain their livers in order to please her ancestors and achieve more power.

Oby employed the same tactic on Kumkani and Siyanda Khoza, who were attempting to extract a story from her. Ayanda Majola was the one she was truly chasing, but she got lucky when Tshidi saved her from Oby’s wrath. Tshidi was also able to free Kumkani from Oby’s spell and convince him to assist her and Ayanda.