Mondli Makhoba, a 43-year-old South African actor, is best known for co-starring alongside Mbalenhle Mavimbela in Hlomu The Wife as Nkosana.

Known as: Nkosana on the Wife

Mondli Makhoba was born on May 15, 1978, in Johannesburg, South Africa. He grew up in Gingindlovu and was born and raised in Umlazi. He is a Zulu and English speaker who has made a name for himself in the performing world. Makhoba wanted to study information technology so he could work with computers, but his family couldn’t afford his tuition.

So he joined local choirs and began to sing as part of his craft. Fortunately, he was told about a play called Shaka Inauguration while singing in a community chorus, and he auditioned for the character of Shaka and was cast. 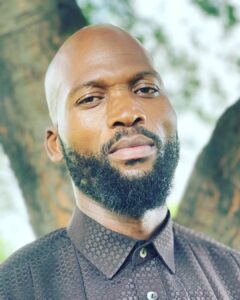 Mondli, a former Uzalo actor, began his playing career in 1999 in SHAKA’s INAUGURATION, a theatre production. He toured the world with this show, playing the part of Shaka. He spent six years acting in major theatres around the world, including those in the United Kingdom.

“I didn’t want to have regrets and I decided to purse acting and I got the chance to tour the UK and perform in big theatres over there. I wanted to exhaust all the talents that God has given me,’ he said in News24 publication.

Acting, he believes, is both his passion and his destiny. Mondli’s ambition to pursue acting grew as a result of her first acting experience.

Mondli earned a role on The Wife with Mbalenhle Mavimbela in 2021. On The Wife, he portrays Nkosana, the eldest of eight Zulu brothers whose parents were brutally murdered by a community vigilante in Mbuba, KwaZulu-Natal. He’s a man of few words who thinks things through before acting. The telenovela is based on a Dudu Busani-Dube novel.

Other things to know about Mondli

●Mr Makhoba, also known as Shukela on Imbewu, used to work in IT before deciding to pursue acting. However, due to a lack of funds, he was unable to continue his schooling.

●Mondli’s favorite local actors are Siyabonga Thwala and Xolile TshabalalaTshabalala, while Denzil Washington is popular in the United States.

●The Uzalo actor says his part on the show was awkward since it did not reflect his true self. He is a kind man who would never take advantage of ladies in real life, but on Uzalo he does.

●Mondli made his cinematic debut in Australia in 2010, as Mthobisi in Malokazane on Mzansi Magic. In 2015, he appeared in the Australian film Casualty as an African warrior. Mondli has also appeared in movies such as Paper Planes (2011), Casualty, iZulu, Lindwni, Grey Matter, uUMahamba Yedwa, and HG’s The Cobra.

●Mondli’s best moments is when he played his role of Shukela where he appeared on the same screen with Leleti Knhumalo. “I grew up watching Leleti Khumalo, so to share a scene with her was the most awesome thing ever and BEST OF ALL to work with Duma ka Ndlovu, a man | respect a lot and | honour with his work was so incredible.” Said Mondii.