10 real facts you need to know about our Miss South Africa 2021. Who she is before she was crowned. A little bit information to know about her background. When she was little she fall a victim of bullying because of being tall and thin. Her language native language is Zulu and she is also a Christian.

2. She is the last born in her family among three children, her Brother and Sister.

3. In 2010 she lost her father Muntu Mswa after he got ill for just short period of time. He was a diplomat and minister. Her mother Hleliselwe Mthiyane Mswane is still alive and she works as an account clerk and homeowner.

4.Lalela Mswane is a South African ballet dancer which she started training in 2006. She also model and beauty queen who holds and law degree.

5. Educationally, She attended Crawford Preparatory and Pro Arte Alphen Park High School. After high school she applied to study at University of Pretoria where she obtained her LLB law degree from 2016 to 2020.

6. She was Matric Experience 2015 first runner-up that’s when her pageantry career began.

7. Prior to becoming Miss South Africa, she was signed to the South African modeling agency Alushi Models. 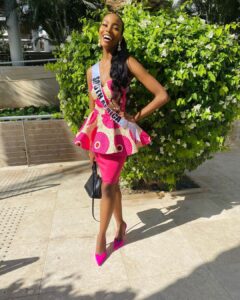 8. She started her nonprofit organization called the Lalela Mswane Foundation in 2020. The organization aim is to empower the youth to soar beyond the boundaries that life has placed before them.

9. She was among 30 women shortlisted Miss South Africa on 6 July 2021. On 3 August she was announced as one of 10 semi-finali. From there she continued to win until to final 3 competitors.

10. On 16 October 2021 she won the title for Miss South Africa 2021 at Grand West Arena in Cape Town. She received an array of prizes and rewards, including R1 million, a one-year residence in a fully furnished apartment in Sandton, a one-year lease on a Mercedes-Benz C-Class, and the opportunity to represent South Africa at either Miss Universe 2021, Miss World 2022, or Miss Supranational 2022.