10 interesting facts about the actor Meshack Mavuso who is known as Dr Thabo Dlamini.

10 facts you need to know about Meshack Mavuso Magubane. He was best known as Javas on Yizo Yizo.

2. He is married to her beautiful wife and the couple has been married for more than two decades.

3. Meshack has been blessed with four kids.

4. Besides pursuing his career in acting, he is also a Director.

5. His career in acting began through acting in theatre until he got his first role to play in Yizo Yizo as Javas.

6. Due to his role he was playing on Yizo Yizo, most people are still calling him Javas.
For him its something that shows how they impact people through their acting.
“People still call me Javas and for me this is something that shows how as actors we have an impact on people through the characters that we play. It’s great that we are able to make a difference in other people’s lives,” he says.

7. He became famous after he appeared in a reowned movie Isidingo as Visu Moletsane in 1998. 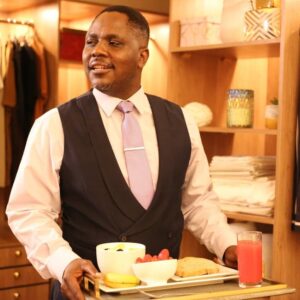 8. Other drama series he appeared on includes Heist, Isithembiso, Zero Tolerance, Soul City, Zabalaza, Who Do You Think You are (South African documentary) and the River

9. He was one of the celebrity dancers in the Strictly Come Dancing New Year Special, which aired on SABC2 on 31 December, 2008. His dance partner was Robynn Soules.

10. Currently, this year 2021 he is acting on Durban Gen as Dr Thabo Dlamini. On Durban Gen he portrayed a character as a womanizer and is married to Dr Precious Dlamini.