Kagiso Rathebe was born 26 October 1992 , he is known for his character as Amo on Scandal.

Known as: Amo on Scandal

Kagiso Rathebe is South African Actor who is known as Amo on Scandal. He was born on the 26th of October 1992, which means this year 2021 he is 29 years old. His height is probably 1.8m and he is currently resides in Johannesburg, Gauteng. Also he is a Singer-songwriter and Guitarist. Educationally he obtained a Diploma in live performance in 2013 at Market Theatre Laboratory where he studied for 2 years. He is also a model.

After obtaining his Diploma in Live Performance, he began to performs in Theatre. The theatre drama he appeared on includes Milk and Honey. Her journey didn’t end there, he was a starring in International series and also became part of television commercials. The international series he appeared was called Nauty and Crosses, a supprting role, potraying a character as a Toyboy alongside Boni Mbuli. 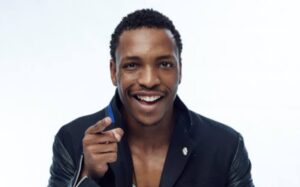 In the year 2016 and 2017 he got to role to play on Igazi as Anda from Season 1 and 2. In Generation the Legacy he acted a supporting role as Ilan and he got another supporting role on Keeping Score as Tongai. He acted in a film called Opus in 2018 and it was leading role. Other roles he acted includes Spoorloos as Sbusiso. On Netflix he acted on Single Gals as Xolani and on Grit as Noah.

The role of Amo came in June 2019 after he received a call from his agent that Scandal need new actor. His role was to potray a character as a Freelancer Photographer called Amo. Currently he is still acting on Scandal as Amo.

Some television commercials he appeared on

AVBOB television advert as presenter in 2018