Biography profile of Thusheleni from Imbewu

From: Inanda, or eNanda in KwaZulu Natal

Known as: Thusheleni on Imbewu

Kaylin Soobraminian is a South African actor best known for her role as Thusheleni on the etv show Imbewu the Seed. On September 17, 2000, he was born. The Imbewu star was born in Phoenix, Kwazulu Natal, to a largely Indian family, but grew up in the little hamlet of Inanda. His family was poor, and his grandmother couldn’t afford to pay rates, so they relocated to Inanda, where rent was significantly less.

He moved into an RDP house in the township with his unemployed mother, Vevina (37), and brother, Junior, when he was just a year old (14). He dreamed of playing soccer to help his destitute family escape poverty.

He never imagined himself as an actor. He had always wished to play soccer in order to help his family escape poverty. However, in 2018, he met Bab Duma Ndlovu, the creator of Imbewu, who was looking for a Zulu-speaking young Indian actor at the moment, and his life was forever transformed.

“This is the guy!” Duma Ndlovu exclaimed when he met Kaylin and heard his flawless Zulu. Kaylin was contacted for auditions and was cast in the lead role.

On 27 February 2018, Kaylin started his acting career on Imbewu the seed, he acts as Thusheleni on the show. On the drama series he is acting as manager at Emsamo and his girlfriend is Popie, a waitress at Emsamo. 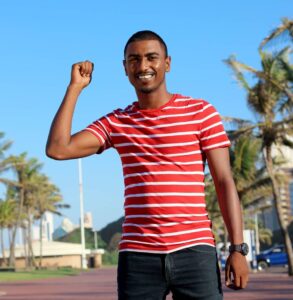 He learned isiZulu while living in the crime-ridden Bhambayi informal colony near Durban. Soobraminian is significantly more fluent in IsiZulu than in any other language. He learned IsiZulu while still in creche with black children who refused to befriend him if he didn’t speak the language.

“I used to go to a creche with only black people,” Kaylin says. “So the other kids said if I wanted to be friends with them I should learn to speak isiZulu or else they would stop hanging out with me.”

So he did learn the Zulu. He was proficient by the time he reached primary school.

The family of Thusheleni that is known is his mother and grandmother. He also has a sibling brother Junior. Kaylin is an Indian born in Phoenix in KwaZulu Natal. The place is largely for Indian community.

The only girlfriend people know is the one on Imbewu, Popie. He has not yet revealed his relationship status in real life.