Khutjo Green biography AKA Naledi on House of Zwide.

Khutjo Green is a South African Actress and Theatre director. She was born 18 February in Polokwane in South Africa. The actress is known as for playing a character as Naledi on House of Zwide.

Biography profile of Naledi from House of Zwide

Known as: Naledi on House of Zwide

Khutjo Green is a theatre director and actress from South Africa. She was born on February 18 in South Africa’s Polokwane in Limpopo province. The actress is well known for portraying Naledi on House of Zwide. Also she fluent in speaking Sepedi.

She graduated from Witwatersrand University with a Bachelor of Dramatic Arts (Honors) degree in 2007, concentrating in Physical Theatre, Writing, and Performance. 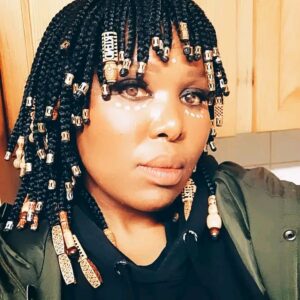 In the SABC2 drama series Guilt, Khutjo Green, a South African actor and filmmaker, plays Emily, a kind and sympathetic bar owner who wants nothing more than to be welcomed by the neighborhood. It was her first television leading role.

She has appeared in many theatrical productions. In 2014, she directed Democracy for the National Arts Festival and Have You Seen Zandile?, which received nominations for the Naledi Theatre Awards in several categories.

Khutjo has also appeared in a variety of television shows, such as Mfolozi Street and Thola. She also played Sergeant Ledwaba, a pivotal recurrent character, during the first three seasons of the SABC1 youth soap opera Skeem Saam.

She also had a recurring part in the telenovela Broken Vows on e.tv, where she initially appeared in Episode 54 of Season 1 on June 22, 2017.

In the SABC2 drama series Guilt, about a group of neighbors who find one million rands in a near-fatal accident and must decide what to do about it, she received her first television leading role in 2018.

In 2022, she appeared on House of Zwide as Naledi. Naledi was Isaac’s ex of 20 years. After coming back into Molapo family she discovered a secret about Ona’s mother. She then began blackmail Isaac which lead her to pretend as if she Ona long lost mother.

The same year 2022, she acted on Savage Beauty, potraying a character as Chief Nurse Khutjo Green. Soon she will appear on Netflix series called Numoor Numoor.

● House of Zwide – Season 1 as Naledi

●The Docket – Season 1 as Guest Star

● The Estate – Season 1 as Dr Mseleku

For her work in The Line, a play depicting the xenophobic violence that afflicted South Africa in 2008, she received the Naledi Award for Best Actress in a Lead Role in 2013.