Fiona Ramsay is a South African Actress and Freelancer. She was born 13 June. In 2010, she portrayed Veronica in the drama series The Mating Game on SABC2.

From: Johannesburg in South Africa

Actress and freelancer Fiona Ramsay hails from South Africa. In Johannesburg, she was born on June 13. In the drama series The Mating Game on SABC2 in 2010, she played Veronica.

She earned her degree from the University of Cape Town before forming the Troupe Theatre Company, which has produced such plays as Talking Heads, East, Total Eclipse, Metamorphisis, and Threepenny Opera. Also she studied at the University of Witswatersrand. 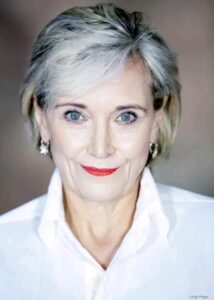 Going To St. Ives, Decadence, Talking Heads, The Real Thing, Summit Conference, The Book Club, My Brilliant Divorce, Life X 3, Ladies & Gentlemen, and Shakespeare and Honour are just a few of the theater productions she has appeared in.

She directed Barney’s Women in 2005, a tribute to Simon Barney, the former artistic director and founder of the Market Theatre, and Gugu Mzimba – The Spirit of Gerard Sekoto in 2006. She most recently won a Durban award for Best Director for her Nunsense production.

Fiona has performed in several plays for the Royal National Theatre in the UK, including Lady Croom and Hannah in Tom Stoppard’s Arcadia and Lady Macbeth in Macbeth.

Her roles on UK television in The Bill, Element of Doubt, and Lynda La Plante’s Supply and Demand as the villain, a teacher, and a severe magistrate, respectively

She most recently traveled to Los Angeles to work with US actors Tim Robbins and Derek Luke on their dialects for a movie that was filmed in South Africa.

She has also acted in a number of foreign films, such as Catch A Fire, Stander, Red Dust, Country Of My Skull, and Borderline.

In 2010, she portrayed Veronica in the drama series The Mating Game on SABC2.

She joined the cast of the e.tv soap opera Scandal! in 2013 as Helen, a new bad girl with a big secret who takes over as Editor in Chief of Secrets.

She made numerous television appearances in the years prior, including Taryn & Sharon, Diamond City, It’s OK We’re Family, Abo Mzala, The Mayor, and Queen Sono. She began working on three serials in 2021, playing the characters “Denise” in season two of the M-Net soap Legacy, “Charlotte Lawson” in the M-Net miniseries Lioness, and “Cathleen Tyrone” in another M-Net thriller called Reyka. 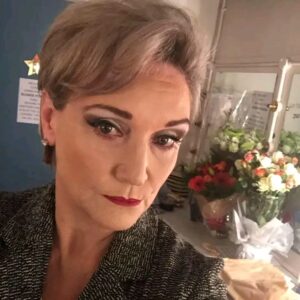 Other activities she is involved.

Fiona presented the radio shows Art Of The Matter, Cultural Exchange, and Between The Covers, which focused on literature.

She established the Speakeasy Vocal Academy and offers vocal emancipation instruction across various industries, including business, corporate, and the arts.

Fiona enjoys entertaining people with her culinary creations and enjoys spending time with friends. She is a vegetarian.

Her hobbies include sailing, walking, reading, taking trips, and discovering new areas with her basset hounds Babette and Chanel.