Lesley Khoza is a South African actor who was born 3 May 1989, age 33 years old. He is best known as Detective Collen from Giyani: Land of Blood.

Known as: Detective Collen from Giyani Land of Blood

Lesley Khoza is a South African actor who grew up in Diepkloof in Soweto, Gauteng. He was born on the 3th of May 1989 which means he is 33 years old as of 2022. The upcoming actor has 1 sister and 3 brothers, altogether they are 5 children in their family.
In 2019, his mother passed away which left him so devasted.

The community in which he grew up is faced up with people who use drugs. Anyway, he didn’t get involved in the use of drugs but had to stay away.

He went to Fidelitas comprehensive secondary school and then studied drama at Bara Funda Centre. Throughout his primary and high school, he was an athletic even after high school. 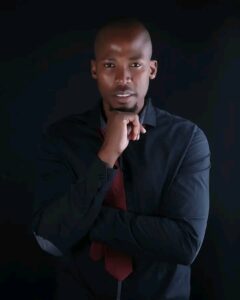 Khoza didn’t get the opportunity to attend schools that master in acting classes. He advanced his skill for acting through attending workshops and networking.

Lesley almost missed the opportunity to act on Giyani Land of Blood. During that time he was not working and has no means to go to Polokwane for the auditions. Luckily, he managed to go there and got the role of Detective Collen. This was his first television role.

After he got the role in 2019 and his Mom passed away the same year. It was very emotional for him because he wanted to do something for his Mom. He continued acting on Giyani Land of Blood in Season 1 until Season 2.

Giyani: Land of Blood is a South African telenovela drama series produced by Tshedza Pictures. It is the first Xitsonga drama series to take over the screens of many South African families. The first episode was aired on 1 April 2019 and the second season followed on the 1 November 2021. Lesley stars as a detective known as Collen. The show is aired on SABC 2 from Monday until Wednesday at 21:30.

Also read: 12 South African actresses over 50 years old and above.

He has another skill as a Carpentry. In 2017, he was also a partner at Bolt. Also former owner driver at speed services couriers AKA -Crush and Burn Couriers.

So far there is no information about his wife or girlfriend even children. This will be updated if available.