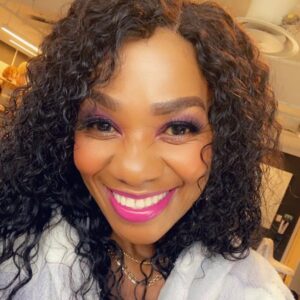 Lucia Mthiyane biography she was popularly known as Rachel Phakade on Rhythm city.

Lucia Mthiyane is South African Actress, Model, Singer, Entrepreneur and Chef. Every year she celebrate her birthday on the 16th of September and she was born 1975. She is from Umlazi township in Durban KwaZulu Natal,South Africa. Currently she resides in Sandton Gauteng. In terms of education she attended Swelihle High School.

Career as a Chef.

As a Chef she was appointed as the judge for Taste of Durban with other Chefs. The show had chefs who came from different countries showing off their culinary skills. Also she was nominated to conduct a demostration as chef for Spekko Rice all over the country. She teaches cooking classes at Miele Kitchens around the country. Mthiyane has also released a book for recipe called Kitchen Queen. The book can be found in different store online and physical store.

Career as a Singer.

She has performed in musicals theatre production, television series and has done TV presenting and corporate work.. Due to her good performance in music, she appeared in Colin Law’s production of Blues Brothers and was nominated for best performance in a musical. And that was in 1997. The following year in 1998 she was got an FNB Vita Nomination. The nomination was for Most Outstanding Performance in Musical Theatre in Kippie.

Career as an Actress

In 2007 until 2008 she appeared in Rhythm city as Rachel Phakade. Her character as Rachel Phakade was musical as well. She also got a role on Muvhango as Selinah Mdluli, as a mother to Pearl( Jo-Anne Reyneke).
She appeared in the Richard Loring production of Girl Talk in 1998 and in Janice Honeyman’s Little Shop of Horrors at the Civic Theatre. Other television series she has acted in include Soul Buddyz, Backstage, Mzansi, Generations and Flat 27.

She was currently part of Durban Gen this year 2021 acting as a Sister to Macele.
Her role appeared after Macele died of heart attack and she was a family member at the funeral. She blamed Bab’Gumede for the death of her Sister and she even caused drama at the day of the funeral burial.

Also she was an ambassador for Carducci Woman and Estee Lauder and gives motivational talks to women.

Lucia doesn’t love to do dishes but she prefer to cook only even everyday. “I can cook everyday but don’t make me do dishes,” she told Drum

She loves music than cooking and acting and she also doesn’t like to wash clothes by hand. The actress genuinely loves children.