Sthandwa Nzuza biography and career, she is known as Dr Zandile Mkhize on Durban Gen.

Sthandwa Nzuza is a South African actress and Radio personality. She was born on the 9th of February 1984 in Inanda township, KwaZulu Natal. Which means that this year 2021 she is 37 years old. Educationally she studied drama and graduted at Durban University of Technology. Nzuza is married to a Pastor called Philani Gama. They couple have one kid.

How did she grew up?

When growing up she used to stay home most of her time doing her chores. Like most kids do roaming around after school , she was different and preferred to go straight at home . She didn’t have a boyfriend until the time when she was in Varsity.
“I was the type of girl who will go to school and come back home to do her chores. I didn’t even have a boyfriend until I was in Varsity. 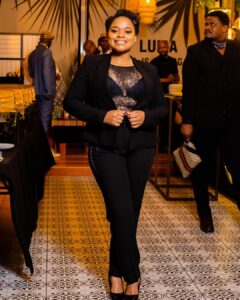 Career as a Radio personality

Almost 10 years she Deejays for very famous radio station called Ukhozi FM. She was very passionate about her job, most listeners loved her. She used to play music with combination of Jamz that got listeners to love her Deejaying. In the year 2019 March she left radio and then after she got opportunity for acting.

How did she end up in Career for acting?

In 2014 she was guest in Zaziwa, a music show aired on SABC 1. As well she was cast on Mthunzi.com, Single Galz and Perfect Family. After 10 years as a DJ, he got a role to act on Uzalo in 2017. She appeared in season three of the 26th episode. The role made her so popular she became viewers best. In the drama series on Uzalo, she was potraying character as Innocentia. Same year 2017, she also got another starring role on the telefilm Imbeleko. The drama was aired on Mzansi Magic on September 23.
In 2018 she came back to play the same role on Uzalo as Innocentia and that was season 4.

She also got her first lead role Mzansi Magic series called Ifalakhe. In that role she was a villain, an evil queen called Nomvula. The story was about the raging Kingdoms set in Southern Africa during the pre-colonial era. The series drama was aired on the 6th of October 2019. After she got the role on Ifalakhe she then relocated to Joburg since she resided in Durban. Also in 2019, she got another role on eHostela, she was potraying a character as sister of Fortunate.

Currently she is acting on Durban Gen as Dr Zandile Mkhize.