Mondli Dlamini biography AKA LJ on House of Zwide.

Mondli Dlamini was born 15 July 1987 in Hammardale. He was known as Abe on Generations the legacy.

Known as: Abe on Generations the legacy or LJ on House of Zwide.

Mondli Dlamini who was known as Abe on Generations the legacy is a South African Actor, Model and Director. He was born on the 15th of July 1987 in Hammardale.
Born in KwaZulu Natal, he is better known as “MoH.” He has a flair for relating with people, having grown up in locations like Hilcrest, Pinetown, and Hammeradale.

He acted on Ngempela which was aired on SABC 1 as well Mutual Friends season 2 on SABC 1. Also he appeared on Ekasi our stories on Baby Mama as a lead actor.
He was well known as Abe from Generations the legacy. 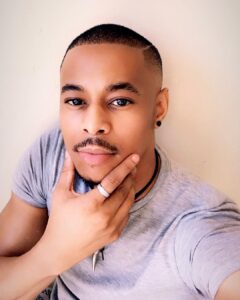 In The River, he was cast as a waitress. His character was a gay man who had the wrong man for him. Eddie, the man with whom he was in love, now dating Andile. Mondli’s character, Ndlovu, is imprisoned after stabbing his lover in a jealous frenzy in the fourth season of the show. His character was written off the show in this manner. Fans praised his on-screen talent and how well he portrayed his character.

Mondli Dlamini has found a new home after leaving The River a few months ago. The actor played Zanele Zwide’s love interest on House of Zwide. The chemistry between them was evident the moment they met. He was smitten by Zanele’s attractiveness, and Zanele couldn’t get over the fact that he was wealthy and had a criminal record. Despite the fact that he arrived with his girlfriend to shop for a dress, the two surreptitiously set up dates and saw one other. Zanele has severed links with her friend with benefits, Sandile, as a result of the relationship.

Besides acting Mondli was also the assistant casting director of the former drama series Rhythm city. He started his commercial modeling career till 2013. After he moved to Johannesburg 2014 in pursuit of a broader career scope.