Nefisa Mkhabela biography known as Ona on House of Zwide.

Nefisa Mkhabela biography who is currently known as Onalerona Molapo on House of Zwide.

Known as: Ona from House of Zwide

Nefisa Mkhabela is a South African actress. She was born in Gauteng Soweto on 14 February  2002 which means this year 2022, she is 20 years old. She is currently resides in Johannesburg.

Mkhabela grew up in Randburg, Johannesburg’s northern suburbs, and has always loved singing, dancing, and acting. Mkhabela’s English instructor even recommended her parents to enroll her at the National School of the Arts to further develop her talents when she was in primary school. Her father, on the other hand, was against it. She began performing in traditional dance and acting in plays in high school.

Her first taste of popularity occurred in 2017, when she was cast with Thembisa Mdoda, Renata Stuurman, and Keke Mphuti in the inaugural season of Unmarried. Mkhabela had previously been seen in commercials on television.

She started acting in Unmarried, a series aired on Msanzi 1Magic 2 February 2018. Also she appeared in Season 2 of Unmarried. On the series she was potraying a role as Mbali both season 1 and 2. As well she also acted in a movie called Ispaza Sasekhaya. The movie was aired April 2021 on Msanzi Magic.

On the 19 July 2021, she appeared in a new soapie called House of Zwide. She is potraying a character as Onalerona Molapo. In the soapie she is a starring, being a daughter of the most successful businessman Funani Zwide. Ona doesn’t know that her father is Funani Zwide. It’s a secret which needs to be revealed later as the drama continues. Both father and daughter are passionately into fashion. 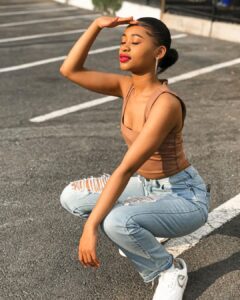 The House of Zwide replaced Rhythm city early this year July. Most people loved Rhythm city but since the new coming drama was aired, a lot of people fall in love with House of Zwide. Especially the character of Ona ( Nefisa Mkhabela) has captured the heart of many people.

Let’s check what Nefisa have said since the soapie started.

“Introducing Onalerona Molapo from House Of Zwide . I am so excited to take you all on this journey of how I brought this character to life and I hope anyone with a dream that’s different is inspired to follow their passion as it will uncover who you really are”

Nefisa Mkhabela disagreement with her Dad about career choice.

Mkhabela got accepted to the University of Johannesburg to study law after finishing matric last year. Her father was overjoyed, but Mkhabela was not. Unsurprisingly, Mkhabela and her father fought after she revealed her plans to leave out of school and pursue her aspirations.

Given that Mkhabela had not yet secured the position and was still in the audition process, it was a risky move and every parent’s worst nightmare.

“My dad and I fought for two to three weeks about it. I wanted this role more than anything and he said I was not going to be able to juggle a main character with my school work in my first year. Eventually, I dropped my studies,’ Mkhabela recounts.

“It was So awkward because my dad is so stubborn and so am I. We didn’t want to hear each other out. It was terrible, we were just butting heads because everyone is trying to get their point across.

“He started to bring his friends into the conversation and his friends were trying to explain to him not to force me. I didn’t want to do law because it’s something he wanted and I just went with it. We had a sit down with my mom and eventually he was like ‘just do whatever, I don’t care”

After disagreeing for sometime her agreed that she must do whatever she want. Unfortunately, she bagged the role she auditioned for. His adamant father was so proud of her. The role was very big one, it was for a lead role as Onalerona on House of Zwide.