Nkuli Sibeko Botman is a South African Actress, Producer and Screenwriter. She was born 24 June 1980, age 42 years old as of 2022.

From: Pretoria in South Africa

Nkuli Sibeko Botman (born June 24, 1980) is a South African actress, producer, and screenwriter. She is most known for her role as Dana Roberts in the SABC1 sitcom City Ses’la, which she played from 2005 to 2010.

She starred in television movies such as Lexus, Table Manners, and other series. Nkuli is married to Thembi Botman in real life, which is why her name is Nkuli Sibeko Botman. She developed and directed the Mzansi Magic sitcom Samsoko as a screenwriter and director.

She received her basic education, including matric, in one of South Africa’s authorized schools. She went to the University of Cape Town to study Theatre and Performance after earning her matric. After a number of years of study, she received a diploma. 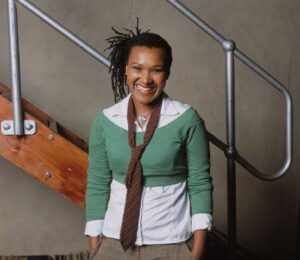 Nkuli Sibeko Botman began her acting career on stage. In 2005, she landed the role of “Dana Roberts” on the SABC1 sitcom City Ses’la. She played the part till the fourth season finished in 2010, and it became incredibly popular.

She earned the Best Supporting Actress Award in the TV Comedy category at the South African Film and Television Awards (SAFTA) in 2009 for this performance.

She played Zanele, an accountant by trade and the quiet one among the four in the Mzansi Magic sitcom It’s for Life. She usually backed her boyfriend Sthe’s (Bonga Dlamini) crazy money-making schemes. She played Dineo’s Nanny in the second season of the SABC1 television series Society in 2009.

In 2012, she starred as “Dana” in the SABC1 comedy Ses’Top La, and she reprised her role in the second season. In 2014, she appeared as a guest star in the Mzansi Magic drama Samsokolo.

Since she is producer, At Jack & Jill Productions, she is the executive producer of the 2013 short film Lexus and the 2018 feature film Table Manners.

She earned the Best Supporting Actress Award in the TV Comedy category at the South African Film and Television Awards (SAFTA) in 2009 .

Thembi Botman is Nkuli Sibeko’s husband. We don’t know if she had children for both Thembi and Nkuli. She makes her home in Pretoria.