Sandra Vaughn is a South African actress known for her soapie roles as Debbie Meyer in 7de Laan. She was born on the 28th of October 1974, age 48 years old as of 2022. Vaughn was born and raised in Pretoria, South Africa, where she now resides.

She made her professional debut in PACT’s farce Hoe Later Hoe Kwater at the beginning of 1996. Then came numerous theatrical performances, radio appearances, singing performances, and TV commercials. 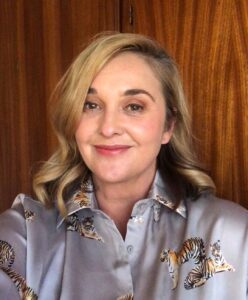 In 2004, she starred in Bobby Heaney’s TV film Swansong for Charlie, in which she had her first main role. She played the role of a “sweet” middle-class “Afrikaans lass” who finds herself in the wrong place at the wrong time in this film.

She made her acting debut in the film 7de Laan in 2005, as Debbie Meyer, a Hollywood actress. Also she acted as Karlize Schoeman in Isidingo (both in 2005). She joined the cast of Zero Tolerance 3 in 2006, playing one of five elite criminal fighters with a zero-tolerance stance toward crime. On Zero Tolerance she starred a role as Hannelie de Kock in the SABC2 police procedural television series.

She had the good fortune to work with Ben Kruger, Nthati Moshesh, Meshack Mavuso, and Terrence Bridgett.

Sandra married fellow actor Pierre van Pletzen in 1996, which made the year even more memorable.