Samukele Mkhize was born 13 April in King Edward Hospital. She well known for acting on Isibaya as Mabuyi.

Known as: Mabuyi from Isibaya or Khwezi from Skeem Saam

She was born in Durban’s King Edward Hospital and raised in Maphophoma, Kwazulu-anger/Madundube Natal’s community. Her grandparents were both pastors, and they were active members of the church. Their home was always occupied by people who were either sick or seeking God. The family went to at least three church services every day, but her brother and Samukele only went to two because they had to go to school on weekdays.

She was a quiet child as a child, not because she was shy, but because she was keenly aware of other people’s actions and personalities. Because of the way her grandparents educated them, she was very courteous. She excelled in sports, which she attributes to the fact that it was the only time she got to have fun. 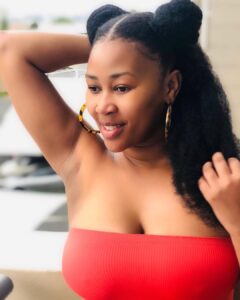 She acted in a few television dramas, including Uzalo, in which she had a minor role.
Also she met the artistic director of the community Art Centre, Mr Edmund Mhlongo, when she was a member of an amateur theatre, music, and dance company in KwaMashu, KwaZulu Natal, in 2006. She recalls him telling her, “You have potential.” He began training her, and by the end of 2008, she had secured a role in Madame President Musical, one of his groundbreaking musicals.

She landed her first leading part, which earned her acclaim in the acting world. She was nominated for Best Newcomer and Best Lead Actress in a Musical at the Mercury Durban Theatre Awards. 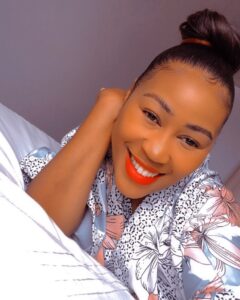 Her character as Mabuyi from Isibaya.

She was visiting a friend in Johannesburg at the time. She heard about auditions in Durban for a new show called ‘The Road,’ so she flew back the next morning to do the auditions. Everything went fine, however she was never cast in the final cast.

A few months later, as she waited for a job on the show to open up, Bomb Productions casting director Kutlwano Ditsele called her and said there was a character that they believed would be excellent for her, and that’s how she ended up playing Mabuyi on Isibaya.

Currently she got another new role on Skeem Saam. She is potraying a character as Khwezi.