Siphosethu Mabaso is a South African actor known for acting on on Durban Gen as Bra John.

Siphosethu Mabaso who is known as Bra John was born 27 March 1979. His age is 43 years old as of 2022. He was born and raised in villages in KwaZulu Natal. Growing up, he relocated in different places.

He went to school until standard 5 and 6. Unfortunately he dropped out before he reached matric. It means that he doesn’t have matric as a high school qualification.

Although he didn’t have a matric he managed to have a driver license. He started off as truck driver until he got an opportunity to act on Uzalo.

In 2010, he began his own driving school where by they teach people how to drive. The name of the driving was called Siphosethu driving school. It was named after his own first name.

When he was young he used to love watching those old Telenovela. His wish was to see himself as those people he was watching. Although drawing was his passion at school he decided to pursue career in acting.

In 2018, he got a call that Uzalo was looking for a new character of age around 50 years old. During that time, Siphosethu was far from reaching that age. Since he loved acting he went for the auditions.

After the auditions, he got another call from Uzalo producers that he got the role. He was to act as Bab Zondo on Uzalo. It was his first time to appear on Television.

His first appearance on Uzalo opened another door for him. He got another role to play on Diep City again.

It didn’t end there, the door kept opening. He got another role to act on Durban Gen. On Durban Gen he potrays a character as Bra John, the cleaner at Durban General Hospital. His character is developing as we saw him using muthi on Matron Nkabinde. To see more of his character watch Durban Gen every week days 18:30 on e.tv.

In 2020, he got another role to act on Isiphindiselo as Prison Administrator. 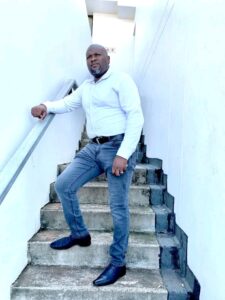 He is married man with kids. His advice to his kids is that school is important. Since he is a drop out he encouraged them to go to school.