Biography profile of Flavia on Uzalo

From: Ntuzuma in KwaZulu Natal

Known as: Thobeka on Isibaya

Sthembile Mhlongo is a South African writer, producer, musician, actress and presenter. She was born on 27 April 1983, age 39 years old as of 2022. Born and raised in Ntuzuma in KwaZulu Natal.

She is best known for co-hosting the SABC1 Christian music show Gospel Gold with Sisanda Henna.

After completing her Media Studies diploma with a major in Advertising and Journalism, she began her work in the media industry.

Sthembile has worked on productions such as the SABC3 docu-reality travel series Oceans 3 and the e.tv anthology series eKasi: Our Stories, both on and off screen. 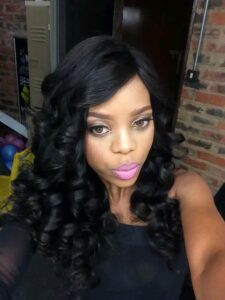 She worked as a marketing manager and presenter for the religious channel One Gospel, as well as a freelance journalist for a variety of magazines while working for a Johannesburg-based advertising agency.

Sthembile joined Sisanda Henna as a Gospel Gold co-presenter for the fourteenth season in May 2014.

She was originally credited in Season 6, Episode 76, which aired on June 25, 2018, in the recurring character of Thobeka on the Mzansi Magic soapie Isibaya. However, Lala Tuku was credited in the role a few weeks later, and she began appearing as Thobeka in Episode 85.

Sthembile made her acting debut as Nomvula in the SABC1 drama Emjindini, which follows a modest miner in a tiny town who discovers a trove of gold coins. The first episode of the series aired on September 16, 2018.

Sthembile bagged a role to act on Uzalo as Flavia. Flavia work hand in hand with Constable Biyela at police Department.

She has one kid which she always post pictures on he Instagram. It’s not yet known if she is married or single or in a relationship. There is a baby daddy out there.