From: Polokwane in Limpopo

Known as: Paxton on Skeem Saam

Thabiso Molokomme is a South African actor, presenter and voice over artist. Currently he is 21 years of age as of 2022. He was born 13 May 2001 in Polokwane, Limpopo.

It took six rounds of auditions before he got a job at one of the biggest youth edutainment shows in the country. He mentioned that he parents convinced him to study at the University of Johannesburg and that is when he decided to join and agency and started auditioning.

Thabiso recently joined Skeem Saam as the son of Mr Kgomo, the Turfloop hospital’s superintendent. He is potraying a character as Paxton on Skeem Saam.

He not only is an actor but he is also a YoTV presenter, MC and voice over artist

He prides himself on being a spiritual being and believes that God has played a huge hand in who he is today. 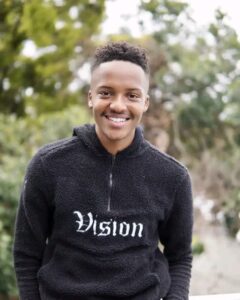 Also read: Stephanie Sandows said the “age gap” between her and Hungani Bothered her

In the series, he is problematic and gets into trouble for vandalising the Welcome to Turfloop high before meeting him.

He plays a troubled youngster who has not recovered properly from the trauma of his sister’s tragic murder. Paxton failed him, and he had to repeat a grade, so his parents have brought him back from Johannesburg, where he was attending school.

He is unhappy that his classmates are younger than him and causes trouble at every opportunity.

So far there is no information he revealed about his girlfriend or any pictures about her on his social media platform.

His net worth is not yet known. He is still new comer in the entertainment industry. His income is still growing.