Thabo Mguni biography, age and career, he is known as Mbatha from Uzalo or Bra Steve on sitcom Family Bonds.

Thabo Mguni who is known as Mbatha from Uzalo is South African Actor and Businessman. He was born in Umlazi V Section but he grew up in Lamontville in KwaZulu Natal, South Africa. His nickname is Bra Steve from sitcom Family Bonds. Mguni favorite TV show is Channel food networks. Someone that he thinks she is beautiful is her fiance. He also shared that his children makes him laugh and he has a crush on Baby Cele( Gabisile on Uzalo). As well he is improving to become a better Father to his children.

Although Thabo’s father feared for him that he will die. His beliefs were not true because his son is still alive and he is acting on Uzalo as Mbatha. After acting for some time he went back home to study further for studies in Drama at the University of KZN.

He began falling in love with acting as a child. His inspirations came from the cast of Asinamali which was written and directed by Mbongeni Ngema. The cast of Asinamali were rehearsed in Lamontville where he grew. During their acting he loved their energy and how they were tackling issues in the community. After that he began to watch plays around eThekwini until he was made a lead actor of Abasheli by Tiki Nxualo at the Playhouse Company. In the house he played shows such as Jimbo and Taxi Jam. “I became an in-house actor. I played in shows such as Jimbo and Taxi Jam,” he said 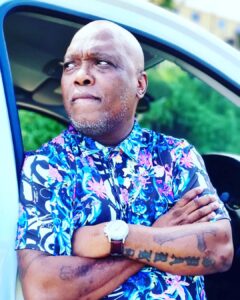 Thabo is well known for starring a role on a sitcom Family Bonds as Bra Steve from 2007-2009 in Season 1 and 2. In 2011 he acted on former Generations as a prisoner known as Khuboni in Season 1. He also became part of chorus on Gibson Kente’s play, Mama’s Love. In the drama series Imbewu he acted as Sipho in Season 1. As well he appeared in Zero Tolerance as Pilot in Season 3. He once traveled to Europe and America for the musical Isikhulu, he met with actors such as Peter Mashigo and Mfana Hlophe.

Currently he is acting as Khethukuthula Mbatha on Uzalo.
” Mbatha is known for dodgy deeds and he doesn’t change. He wanted to be Pastor and tried so hard to sabotage Pastor Gwala (Menzi Buyela ). He hasn’t changed. Although the church members believes there is something wrong with him, he doesn’t care. He is manipulative and controversial Mbatha that he was before he left.” Thabo told Daily Sun

Thabo own a production called Amanguni Productions and Services. The production works closely with the KZN government. His dream is to see young talent in acting, who are not too big for their shoes. “The life span of an actor is too short. I’m lucky that I still do what I like,” he said.