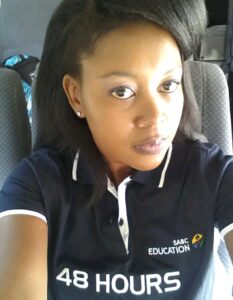 Tintswalo Mushwana as an SABC 1 presenter of educational show.

Tintswalo Mushwana grew up in Nkowankowa, a small village west of Tzaneen in the Limpopo province of South Africa. She is a South African Actress and Presenter who was born on 16 November.

She is most known for anchoring the SABC2 programmes 48 Hours (a youth instructional series) and Vusaseki, a Xitsonga conversation show.

She began her television career in 1998 as a translator and subtitler for a youth show called Scamto Ground Breakers, and she began her presenting career in 2007 as the host of My Teacher Made Me.

She then widened her career path by working for firms like Ochre Media, Endemol, and Mindpool Productions as a scriptwriter, voice over artist, researcher, and production manager.

The mother of two is proud of her ability to speak and understand the majority of South Africa’s official languages, despite being deeply anchored in her Xitsonga culture.

She acted on Xitsonga drama, Giyani Land of Blood. On the drama series she was potraying a character as Visinha.