Phalang Phela was born 21 November 1996. She is well known as Tebogo from Scandal.

Biography profile of Tebogo on Scandal

Known as: Tebogo on Scandal

Tebogo on Scandal real name is Phalang Phela, a South African Actress, Television presenter and Artist. She was born on the 21st of November 1996.

In 2016, she began her career in entertainment industry when she appeared as a guest presenter on YoTV. Being an entertainer is something she always knew she would do since her days in primary school. She was that girl who always participated in cultural activities through her career in school until matric. 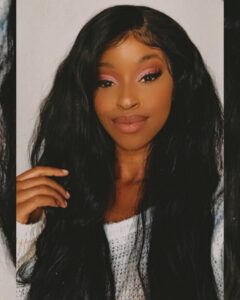 In November 2016, she started a role as an extra on Scandal. They were looking for extras at Q’s lounge even though Tebogo was not yet born. So currently she is acting on Scandal e.tv, potraying a character as Tebogo. On the drama series she is working as a waitress at Q’s lounge.

When she began acting on Scandal she didn’t have experience back then. So she knew that she would learn the ropes on the set as an extra, which is exactly what happened.

Phalang Phela journey doesn’t end with acting because she is doing other things such as being content creator.

She has an Instagram where she is sharing videos about herself doing make up. It shows that she loves looking good all the time. Besides that she is a food lover who want to try different recipes wether at the restaurant or at home.