● Yola Plaatjie is based in Durban, KwaZulu Natal province in South Africa.

● In 2017 she has been working on Radio called Radio DUT. DUT stands for Durban University of Technology, it is the official in house radio station. Its a student centered radio station which is about student. The aim for Radio DUT is to meet the needs of young and active youth, prospective graduates, general society and graduates entering the world of work.

● On Radio DUT she used to work on Weekend lunchtime show. She said that radio gives her so much life.

● Her different face of her life was a book launch, writer blog and poetry session.

● She began acting on a film called Dreams of Gomorrah. This is what she had to say about her character on the film “Understanding the upbringing and psychology of another human, embody it and show the world is another level is challenging. I felt emotions with this character i might never feel again for myself. ”

● Due to her acting on Dreams of Gomorrah, she was nominated for Simon Sabela Film and Television Awards as Best Newcomer Actress.

● After being nominated, Yola Plaatjie won an award for Best Newcomer Actress 2020 on Dreams of Gomorrah. 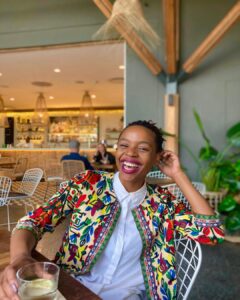 ● In 2021, she joined the soapie Durban Gen on e.tv. She is potraying a character as Doctor Nangamso Jack. A first year intern on Durban Gen Hospital. She looks to spread peace, happiness, and love in the hospital as she believes the hospital can be used as an opportunity to bring peace.

She went to Medunsa [now Sefako Makgatho Health Sciences University (SMU)] on a scholarship that makes other interns undermine her. Still, even though she does not like competing with the other interns, Dr. Jack acquires her goals without even trying.