Known as: Shado on Scandal

Nambitha Ben-Mazwi who hails from Port Elizabeth, Eastern Cape was born 1 December 1988. As of 2022 she is 34 years old. Shado on the etv soap opera Scandal and Lulama on the e.tv telenovela Broken Vows are two of her most well-known roles.

Winston Ntshona, her late uncle (who played alongside Dr. John Kani and other theatre greats) impacted her passion for the arts.

Nampo is a nickname given to her by her family and friends who have known her for a long time. Lady Nam joined the Eastern Cape Children’s Choir when she was 12 years old, and as a result, she was given the opportunity to travel Europe. She also performed in musicals, where she had the opportunity to sing and act. 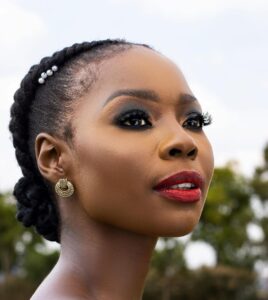 In the Mzansi Magic mystery drama series Doubt, Nambitha Ben-Mazwi played Unathi Mweli, the snarky sister of a man who is accused of killing a stripper. This was her first leading role on television.

She portrayed Tamara in the drama series Black Mirror, which was based on the UK series of the same name, while residing in New York.

She was included in the Top 11 of the reality competition Presenter Search on 3 in 2015 after being added as a wildcard entry. Three new presenters were needed for three of SABC3’s most popular shows, and thousands of hopefuls participated in the competition.

She appeared in the second season of the eKasi+ police procedural series Traffic!, which also aired on e.tv, in a minor role.

In the e.tv serial Broken Vows, she played Lulama, an aspiring designer who heads the wedding couture section at Yours Truly Concepts. From April 2017 through April 2018, the show aired.

She also starred as Nandi in the BET miniseries Madiba, which aired on Discovery Channel in South Africa in 2017.

She played Benathi in the SABC1 drama series Diamond City in 2018. She landed a recurring role as Chardonay on the e.tv soap opera Scandal! in 2019. (better known as Shado).

Who appeared 6 times on Netflix?

In fact, she has landed parts in six different Netflix productions, making her the first South African actor to do so.

On Netflix, Nambitha Ben-Mazwi simultaneously appeared in How to Ruin Christmas: The Wedding, Black Mirror, and Diamond City.

She also acted in the films Dead Places and Happiness Ever After. She now joins the cast of the newest Netflix original series, Savage Beauty, which premieres on May 12 2022.