Who is Nomsa Nene? Age, accident, husband and properties.

Nomsa Nene who was well-known for presenting on Zama Zama was born 1957, age 65 years old.

Nomsa Nene is a South African actress, presenter, and real estate agent who rose to prominence in the 1990s as the host of the game program Zama Zama. She was born 1957, age 65 years old as of 2022. Also she hails from Orlando East in Soweto, thats were she grew up.

Following a successful early acting and presenting career, which included an Off Broadway award for playing the title part in the stage piece Die Swerfjare van Poppie Nongena, she went on to become a television host. 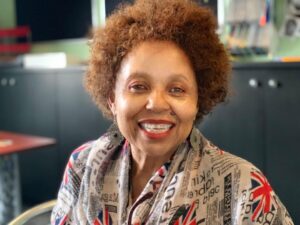 Also read: Who is Linda Mtoba?Age, career, husband and kids.

She made a brief part on Tarzan: The Epic Adventures and guest appeared as Regina Mtu in the third season of the sitcom Going Up.

She left acting in 2001 to launch her own property sales company, Nomsa Nene Properties, after a stint on the e.tv breakfast show The Toasty Show.

In April 2017, she returned to acting after a 16-year break when she joined the cast of the e.tv serial Broken Vows in the character of Lydia, Thandi’s (Jo-anne Reyneke) biological mother who used to work in the same industry as Mam Gerty (Thembi Mtshali-Jones).

Nene escaped a tragic accident in 2004, which resulted in her being declared dead by a daily newspaper and a major radio station. The accident resulted in the death of a man.

The other car’s driver, Zimbabwean Darren Mpofu, was killed in the collision. Mpofu, 31, was buried in Gweru, where he was born.

Who is Nomsa Nene husband?

Nomsa was married to actor Peter Sephuma until 1990, when they divorced.

After the Zama Zama show was replaced with a lottery show in 2001, she retired from performing and went into real estate. She was one of Wendy Machanik Properties’ top-selling realtors (WMP). Her real estate company, Nomsa Nene Properties, was founded in 2011. She remarked in an interview with Sowetan, 1

“After Zama Zama dumped me, I was hurt. I had to find something to do, sell things … I grew up in Orlando East in a two bedroomed house. All I ever wanted as a child was to have my own bedroom and a bathroom. So I went into property and discovered that it is my second love.”

The actress has built one of South Africa’s greatest real estate enterprises. Her company, Nomsa Nene Properties, is based in Johannesburg’s northern suburbs. They do, however, buy, sell, and rent properties throughout South Africa, from KwaZulu Natal to Gauteng and the Western Cape.

The actress has won a number of prestigious acting prizes around the world. The Off-Broadway (OB) award, the Computicket award in 1984, and the Vita Award in 1993 were all given to her. These honors are the result of Nomsa Nene’s innate matchless acting talent as well as her hard work.